League of Extraordinary Gentlemen Wiki
Register
Don't have an account?
Sign In
Advertisement
in: Individuals, Males, Scientists,
and 3 more 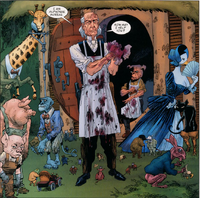 Dr. Alphonse Moreau is a vivisectionist and animal experimenter who assists the British government in creating human-animal hybrids. The real reason for his employment to the British, however, was due to his further skills in creating biological weaponized bacterial hybrids, the "H-140" series, while his animal hybrids were "merely eccentric hobbies" that are tolerated by the government unless they have become unruly and forced to be euthanise.

Originally, Moreau used to live on Nobel Island where he conducted his experiments and met Teddy Prendrick, who was found shipwrecked on his island. The turn of events on Nobel Island led to Moreau believed to have died from his creations. Instead, a previous grievously injured Moreau was reinstated to the South Downs in England at the behest of British Intelligence. Also, Moreau was acquainted again with an insane Prendrick and had his creations in keeping watch on him in ensuring that he never tells the public about Moreau and his experiments.

Moreau played an important role during the Martian Invasion of 1898 when Allan Quatermain and Mina Murray were sent to find him and retrieving one of his "hybrids" H-142 to be used against the invaders. While awaiting at a train station for Quatermain, Murray and H-142 to be sent back to London, Moreau revealed that despite his lack of human companions he is often visited by a nephew, who is an artist and paints his hybrids (implying to be Gustave Moreau).

Dr. Moreau is from The Island of Doctor Moreau by H.G. Wells. In the story Dr. Moreau retreated to Noble's Isle in disgrace; there was no stated link between Moreau and British Military Intelligence. Moreau's given name "Alphonse" is Alan Moore's creative convention as Moreau's first name in the novel is never given.