League of Extraordinary Gentlemen Wiki
Register
Don't have an account?
Sign In
Advertisement
in: Movie Characters, British, Individuals,
and 5 more

Dorian Gray is an immortal due to a missing portrait who is asked to become a member of the League, he declines at first, but after a battle with the Fantom's men, he decides to join them. He is known to be the former lover of Mina Harker.

Immortal, seductive and dangerous, Dorian Gray was one of the most dangerous men in the 19th century. A vain young aristocrat, a picture of Dorian was painted when he was in the prime of life. Overwhelmed by a fear of his own mortality, he made a wish that the painting would age for him, while he remained young forever. By some still unidentified magic, this wish came true. Gray simply couldn't be killed, and with the knowledge he accrued throughout his extraordinarily long life, Dorian was perhaps the most dangerous foe of the League.

Dorian spent a great deal of time in the pursuit of pleasure, revelling in his inability to die. Due to his painting, he could walk though a hail of bullets and come out with only a few holes in his suit. However, he eventually began to murder, killing a woman who loved him and the man who painted his picture. With each passing year his painting aged, showing every wound he took and the signs of every sin he ever committed. Eventually, things reached a stage where he had only to look upon the painting to break the spell, and he constantly kept it covered up. He also took to carrying a sword round with him, disguised as a cane to make it less obvious. He had numerous small affairs, including one which was particularly close to whatever remained of his heart; his time with Mina Harker. Exactly what ended it is unclear, but it was either he broke it off or did something that caused Mina to end things with him.

Eventually he was contacted by the Fantom, who wanted Dorian to help him steal the technology and powers several unique beings, whom the Fantom gathered together under a pretext as the League of Extraordinary Gentlemen. Dorian was persuaded to help out after the Fantom stole his painting and threatened to destroy it, unless Dorian acted as his inside man for the League and acquired samples from Mina, Skinner and Jekyll, as well as photographing the workings of the Nautilus. At first Dorian pretended to be uninterested in joining to the other members, but appeared to change his mind after the Fantom attacked them in his house.

During a subsequent fight in Venice, Dorian used the confusion to kill Nemo's first mate Ishmael, plant several bombs all around the Nautilus and then escape the submarine with the samples of the League, unsuspecting that the Invisible Man, Rodney Skinner, was on board his getaway vehicle with him. The Nautilus and her passengers survived the sabotage thanks to the power of Dr. Jekyll, and with Skinner's aid, managed to track their quarry to Mongolia and the Fantom's fortress. Dorian had just reacquired his painting, when he was confronted by Mina; the only League member with any chance of outlasting him in a fight. He managed to stake her to bed with his sword, but unaware of what she was truly vulnerable to, missed her heart, thus failing to kill her. When he pulled it free, Mina swiftly revived and pinned him to the wall with his own sword. While that didn't kill him, it kept him immobile long enough for Mina to show him his painting. Instantly all the years, the wounds, and the sins he had avoided for so long were returned to him, causing a quick but excrutiatingly painful death, while his painting reverted to the show the man he had once been.

Dorian is immortal and doesn't age, any injuries he receives are healed painlessly in seconds. An expert swordsman who uses a cane sword. However, looking upon his aging painting will transfer his wounds and accumulated sins back on him.

Based on the character created by Oscar Wilde and played by Stuart Townsend in the film. Mack Lambert notes that, in contrast to the novel, "in the film adaptation to The League of Extraordinary Gentlemen, if he saw his painting, the effects of the painting would be placed on him." In the novel it was the destruction of the painting that undid the magic, not the simple act of him viewing it.

Dorian also appears in the comic version of the League of Extraordinary Gentlemen, but only in a cameo in the 1890s League's British Museum headquarters, where his portrait is visible, in the process of being restored, alongside mementoes of previous Leagues and their missions. Presumably this means Dorian either worked with a version of the League prior to the formation of the 1890s team, or they investigated his case. 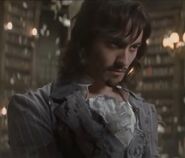