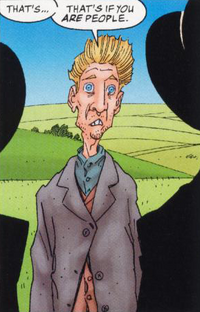 Edward "Teddy" Prendrick was an upper class gentleman who was shipwrecked on Nobel Island that was inhabited by Dr. Alphonse Moreau and his animal people. The events that transpired on Nobel Island drove Prendrick insane and subsequently lives his life as a hermit and an astrologer in England's South Downs.

However, his seemingly quiet life soon came to an end as Prendrick discovered that Moreau had survived which further exacerbate Prendrick's paranoia in which he was secretly observed by Moreau's animal hybrids lest he ever try to tell the public about Moreau and his experiments. During the Martian Invasion of 1898, Prendrick encountered Allan Quatermain and Mina Murray, who were trying to find Moreau. Given his insane nature, he gives them little information on Moreau before running off.

Prendrick is the protagonist from The Island of Doctor Moreau by H.G. Wells.

Retrieved from "https://lxg.fandom.com/wiki/Edward_Prendrick?oldid=9018"
Community content is available under CC-BY-SA unless otherwise noted.