League of Extraordinary Gentlemen Wiki
Register
Don't have an account?
Sign In
Advertisement
in: Males, League members, Scientists,
and 8 more

Hawley Griffin was a skilled research scientist who discovers a formula that makes a human being invisible. The formula entails taking opium and another drug, which make his blood clear, then processing him in a radiator engine. It succeeds, but he finds himself unable to reverse the process. Griffin is a psychopathic murderer, rapist, and traitor to mankind.

Griffin was a gifted young university medical student (who, unlike in the original novel, does not have albinism), who studies optical density. He believed he is on the verge of a great scientific discovery, but felt uncomfortable working under his professor. To ensure he gets sole credit for the discovery, he left university and moves to a dingy apartment to continue his experiments alone.

To finance his experiments, Griffin robs his own father, who apparently had stolen the money himself, and who commits suicide after being robbed by his son. (Little is mentioned of Griffin's family background.) Working reclusively in his flat, he invents a formula to bend light and reduce the refractive index of physical objects, making them invisible. He intends from the start to perform the process on himself, but is forced to rush his experiments due to persistent intrusion from his landlord, who is suspicious of his activities. He processes himself to hide from his landlord, and sets fire to the building to cover his tracks. He winds up alone, invisibly wandering the streets of London, struggling to survive out in the open, unseen by those around him. To make himself visible again, he steals some clothes from a dingy backstreet theatre shop, including a trenchcoat and hat. He wraps his head in bandages to conceal his invisibility, covering his eyes with large dark goggles. He takes up residence in the Coach and Horses Inn in the village of Iping, so he can reverse his experiment in a quiet environment, but complications arise with locals unnerved by his appearance. As a result, his progress slows and he has insufficient money to satisfy the pub owners. To pay the bill, Griffin burgles the home of Reverend Bunting, and the police to come after him, at which point he reveals his invisibility by throwing off his clothes and escaping.

Now driven insane by his inability to reverse the experiment, Griffin seeks assistance from a tramp named Thomas Marvel. He has Marvel carry money for him, but Marvel runs away with the money. Griffin pursues him to the town of Port Burdock, and there runs into his old schoolmate Dr. Arthur Kemp. Griffin attempts to convince Kemp to be his visible partner and help him begin a reign of terror. Kemp, rather than assisting the crazed Invisible Man, alerts Colonel Adye of the Port Burdock police.

Furious, and still planning world domination, Griffin vows to kill Kemp, as the first execution in the reign of terror. He ultimately fails when Kemp rallies the people of Port Burdock, who find and mob the Invisible Man. Griffin however finds an innocent albino boy and makes him invisible to serve as a decoy. The boy is cornered and killed by navvy workers. The invisibility drug wears off in death, and his body becomes visible again, thought to be Griffin.

Hiding and serving the League[]

Griffin himself escaped to Correctional Academy for Wayward Gentlewomen run by Miss Rosa Coote, having his way with the students and resulting in three "immaculate conceptions", including Becky Randall.

After acquiring Dr. Henry Jekyll, Campion Bond dispatched Mina Murray, Allan Quatermain, and Nemo. The three stay the night, and Miss Murray manages to capture him while he rapes Pollyanna Whittier. They return him to the League headquarters at the Secret Annexe of the British Museum, where in exchange for a pardon for his crimes, a search for a cure to his invisibility, and a large sum of money, Griffin agrees to join the League.

Griffin participated in the fight against the Fu Manchu and Professor Moriarty; it was by his shadowing of Bond back to MI5 that he learned that Moriarty was M. Throughout the adventure, he often stated his low view of the rest of humanity (even murdering an innocent police officer because he was cold and wanted the man's clothing) and nearly abandoned the rest of the team by trying to take the Victoria when Moriarty's airship began to fall, but remained a member of the team.

After witnessing the Horsell Offensive at the start of the Martian invasion and listening to Nemo's statements concerning their weaponry, Griffin came to the conclusion that mankind was doomed, and made an alliance with the Martians: he would help them conquer the world, and in return he would rule it alongside them. To this end, he stole plans for the Fall of London from the Annexe, assaulting and humiliating Miss Murray in the process. He also advises the Martians on the nature of the Nautilus, suggesting they infest the Thames with the red weed to impede it.

Griffin returns to the Annexe, where Hyde was waiting for him. The first volume had established that Hyde could see Griffin via infrared vision, as well as smell him; Hyde had formed an attraction to Murray, and in revenge for how Griffin treated her, Hyde raped him to death. As in the original novel, upon his death he becomes visible again; however, the reader is only shown the omnipresent bloodstains caused by Hyde's assault.

In the film adaptation, the name of the character could not be used due to copyright reasons regarding the character from H. G. Wells' novel.[1] Along with a change in backstory and motivation, a new Invisible Man character was created named Rodney Skinner, a gentleman thief who stole the invisibility formula from its creator, whom we are led to believe is Griffin despite his name being unmentioned. However, in the film's novelization, the original Invisible Man was still mentioned as being Hawley Griffin. Skinner is also a more good-natured character who is briefly suspected of betrayal, but remains loyal to the League.

In Kevin J. Anderson's novel The Martian War, set in a world where Wells drew inspiration for his novels from (fictional) real-life events and people, the Invisible Man is also named Hawley Griffin, and also betrays Britain during a crisis involving the Martians (although to the German Empire, not to the Martians themselves). Anderson wrote the novelization of the League film and has said that prior to that had already been a long-time fan of the League comic.[2]

In the television series, The Invisible Man, a recurring antagonist was the character of Arnaud DeFöhn (played by Joel Bissonnette). DeFöhn was a scientist who helped create invisibility, before turning rogue in an attempt to use his power for his own ends. In the pilot episode, he uses "Hawley Griffin" as an alias.

He is based on Griffin, the titular antihero of H. G. Wells' novel The Invisible Man. In the book, Wells only gave the character a last name; Wells was known for his tendency to make most of his characters nameless. Moore gave him the forename of Hawley as a reference to the Victorian murderer Hawley Harvey Crippen.[3] In an interview with Comics Britannia, Alan Moore stated that he felt in only natural that Griffin would side with the Martians (of The War of the Worlds) considering their mutual author. 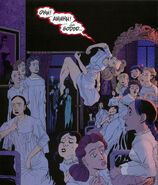