League of Extraordinary Gentlemen Wiki
Register
Don't have an account?
Sign In
Advertisement
in: Martians, Aliens, Villains,
and 5 more 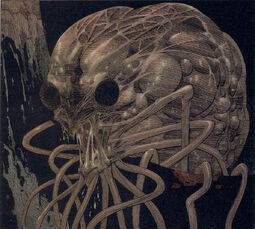 The "Molluscs" are a race of extraterrestrials who at some point invaded Mars and later Earth in 1898.

The name "Molluscs" was given to them by the native Martians, who also called them "Leeches". It is unknown what the aliens call themselves. On Earth they were mistakenly called "Martians" since they came to Earth while fleeing Mars.

At some point in the 19th century, an unnamed alien race invaded Mars, coming into conflict with the native Martian civilizations. The invasion of the red planet would prove a costly mistake. The invaders were pushed back by a large Martian coalition led by John Carter and Gullivar Jones. Due to these circumstances, in July 1898, the invaders were repelled and fled Mars in several cylinder-shaped refugee ships bound for Earth. They had studied the planet through "Glass Eggs" (Two-way visual surveillance devices), that had been sent to the third planet, specifically London, and which were used in observing their earthly adversaries. The invaders' launches were observed by astronomers on Earth who misidentified them as active Martian volcanoes.

The invaders first made landfall in Horsell, in the South of England, in the early morning of August 5th, 1898. The public understandably believed them to be Martians, and many flocked to see the aliens, unaware of the danger. The League was dispatched to investigate the landing and witnessed the brutal onset of "Martian" aggression on a gathered crowd of onlookers. The next day, British artillery and infantry regiments guarding the Horsell Commons crater were vaporized by "Martian" heat rays, after which the invaders utilized Tripods to proceed with their advance on London. On the night before, Hawley Griffin, the Invisible Man, had secretly made a pact with the invaders promising to help them in exchange for making him the co-ruler of Earth. Griffin kept his promise to the aliens by providing them with stolen documents containing British Artillery positions, directly leading to the massacre of the British forces on August 6th.

The alien advance was hindered by Captain Nemo's Nautilus at the Thames River until the Red Weed, an alien plant carried aboard the invaders' ships, overran the river, clogging the waterways and immobilizing the submarine and any other ships on the Thames. This effectively cut off all naval defenses to the besieged country. By August 9th, the invaders ravaged the south of London before gathering at London Bridge, as the other bridges with access across the Thames were destroyed by the British military to prevent their use by the enemy.

The bestial Edward Hyde, having already brutally raped and slain Griffin, physically attacked a Tripod on London Bridge, ripping off a leg and tearing his way into the 'cockpit' of the machine, where he killed and began to eat its 'pilot' until the other Tripods turned their heat rays upon him, killing him. Hyde's actions turned the tide of the battle at the cost of his own life, keeping the Tripods from advancing and allowing the British military the opportunity to launch H-142, a hybrid bacterium made up of anthrax and streptococcus created by Dr. Alphonse Moreau, on the gathered Tripods, decimating the alien forces as well as killing any surviving humans in the vicinity. The release of the hybrid bacteria sealed the aliens' doom. The invasion ended in the utter defeat and extermination of the Molluscs on Earth. A cover story was concocted by the British government: that the invaders were killed by the common cold.

Throughout the twentieth century, a lone Tripod remained standing in central London in commemoration of the war, though it became notably rusted and decayed by the year 2009. By this time, most of the population believed the Molluscs to have been a myth, even after contact had been made with other extraterrestrials on Venus by pilot Dan Dare.

The Molluscs are based on the Martians from the novel The War of the Worlds by H. G. Wells.

In other literary sources (some of which have links with the League series), the Molluscs were given the name Sarmaks. However, this term was never used in the comic.

The idea of H. G. Wells' aliens being non-Martians has been speculated before in other media such as Christopher Priest's The Space Machine, Manly Wellman's Sherlock Holmes' War of the Worlds, and Ian Edginton's Scarlet Traces, as well as the television series sequel to the 1953 film adaptation (which in this case is due to real-life Mars being considered unsuitable for life) and it is also hinted in the screenplay of the 2005 Dreamworks film adaptation War of the Worlds, as confirmed by director Steven Spielberg, that they are from a more distant world.

The League of Extraordinary Gentlemen co-creator and writer Alan Moore has stated that he felt it only natural that Hawley Griffin would side with the Martians, as they were created by the same author.