Prospero (Johannes Suttle) is a wizard and exiled Duke of Milan, who served as the Court Astrologer of queen Gloriana I of England. Under his leadership the First League was formed in 1610.

Prospero was born in about 1519, to Italian aristocracy. At the age of thirteen, he traveled to Prague to seek occult instruction from Johannes Faust. Being otherwise engaged just then, Faust allowed his squire Orlando to return to Milan with the young boy. Prospero eventually became Duke of Milan, and Orlando became his squire.

In 1558, he and Orlando visited Queen Gloriana at Nonesuch Palace where she tasked him to form a League of Extraordinary Gentlemen after her death. It was there that he also met Jack Wilton, the first M, who made Prospero the first 007.

Afterward, he lived in Mortlake under the guise Johannes (John) Suttle with his wife Doll Common and his friend Edward Face. It was there that Suttle and Face practiced alchemy, and established contact with various ranks of spirits including the Thessalian witch-goddess Smarra. For a time, Face served as butler in the house of Lovewit, in Blackfriars. While Lovewit was away, Suttle, Doll, and Face used the house for an elaborate con operation, where they gulled many people out of money.

Suttle is also credited with writing the English translation of the Necronomicon.

After the death of Doll Common in the early 17th century, many thought Suttle dead, and his brother Antonio usurped his position as Duke of Milan. Prospero in fact went into self-imposed exile on a distant island with his daughter Miranda. The island had once been the home of the Algerian witch Sycorax, and at that time was ruled by her monsterous son Caliban. Upon his arrival, Prospero enslaved Caliban. He also freed Sycorax's former prisoner, the sprite Ariel, from a pine tree, and impressed it into his service.

With Ariel's help, along with his magic books, he was able to achieve incredible feats of magic, including invisibility and controlling the weather. He produced a storm that brought his usurper brother Antonio's ship to the island. Upon meeting with Antonio, along with Alonso the King of Naples and others, Prospero learned of Gloriana's death and left the island. He was reinstated as Duke of Milan, and he gave Ariel and Caliban their freedom. He also wed his daughter to Prince Ferdinand of Naples.

The League of Extraordinary Gentlemen

Prospero returned in 1610 to form the League known as Prospero's Men. This League got into various adventures, the last of which occurred in 1696, which entailed ferrying ailing Prospero back to the spectral Arctic Blazing World. His last words before entering were "Follow me." He continues to live in the Blazing World to this day.

In 1958 he tasked Mina Murray and Allan Quatermain to retrieve The Black Dossier from the Ministry of Love. The document's retrieval let them know of the English government's ignorance of The Blazing World.

In 1964 he charged Murray to stop the Selenites and Lunites war occurring on the moon. The purpose of this was to prevent the nearby human colonies from accidentally discovering The Monolith prematurely, as it was not intended to be discovered until 2001.

In 1969 Prospero sent Murray, Quartermain and Orlando to England to investigate the cult of Oliver Haddo. Before sending her, Prospero gave Murray an amulet to wear around her neck.  This talisman eventually saved Murray from being possessed by Haddo's spirit.

In 2009 Prospero contacted Orlando, berating her for her failure to prevent the birth of the Antichrist. He charged her to find Murray and Quartermain and, upon finding the Antichrist, unsheathe Durendal. She succeeded, sending a signal that summoned Mary Poppins, who defeated the Antichrist and retrieved Haddo's undead head.

Prospero is derived from at least three people. The characters Prospero and Suttle, and the real life occultist John Dee. This is made clear in Prospero's line from Faerie's Fortunes Founded:

"Call me by numbers, Suttle, Prospero.\ Caught at my aliases' delta now\ Hang I as in a saddle-wire, a dee."

The character Prospero was created by William Shakespeare, and appears in his play The Tempest. The play portrays the exiled Duke of Milan as he uses his magic to retrieve his usurper brother and the King of Naples.  What could be considered a major difference between the text of The Tempest and that of the League is that Prospero broke his staff and drowned his books, essentially quitting the practice of magic.  In the play, he also freed Ariel and Caliban, even though their League characters accompany Prospero almost everywhere.

It has also been speculated that Shakespeare's Prospero was based on Queen Elizabeth I's consultant Dr. John Dee. Among other pursuits, John Dee studied the occult and alchemy and attempted to summon angels. Under the reign of the puritanical King James, Dee had to defend his beliefs but died in disgrace in 1608. In H.P. Lovecraft's The Dunwich Horror, John Dee is credited with writing the English translation of the Necronomicon.

The Johannes Suttle backstory is from the Ben Johnson play The Alchemist. Jonson was a contemporary of Shakespeare. In the play, Suttle, Face, and Dol Common are con artists that pretend to be various different people, and trick many aristocrats out of money.  Suttle dresses up as "the Doctor" and "The Alchemist" and though some genuine knowledge of alchemy is implied, he never shows or indicates that he is capable of actual magic. There is a reference to John Dee, and at one point, Dol Common dresses up as "the queen of faeries."  The final con is when Face tricks the other two out of their money.

Both The Alchemist and The Tempest contain themes that draw links between art and actual magic. Many early critics saw Prospero as a stand in for William Shakespeare, especially in regard to his closing monologue that refers to a "great globe" and quitting his "art", as it was Shakespeare's last play. In The Alchemist, the main characters may not have supernatural powers or a Philosopher's Stone, but they can turn lead into gold with their words. Alan Moore has expressed his belief in magic as such:

"I believe that magic is art and that art, whether it be writing, music, sculpture, or any other form is literally magic.  Art is, like magic, the science of manipulating symbols, words, or images, to achieve changes in consiousness." 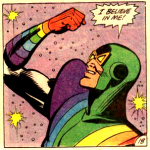