League of Extraordinary Gentlemen Wiki
Register
Don't have an account?
Sign In
Advertisement
in: Males, British, Individuals,
and 4 more 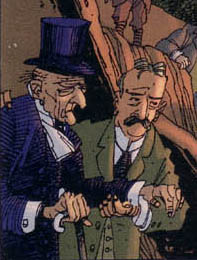 Reverend Septimus Harding was a long-suffering and good natured old clergyman who is the Warden of an almshouse.

He attacked the supposed miracles at miss Rosa Coot's Correctional Academy for Wayward Gentlewomen Schadenfraude. Harding was later present at Horsell Common where the "Martians" made their first landfall on England. He was among the group of volunteers who tried to make first contact with the aliens. But, they failed to realize the aliens' true intentions for Earth, and Harding was incinerated and killed by the aliens' Heat-Ray.

He appears in Anthony Trollope's Chronicles of Barsetshire novels: