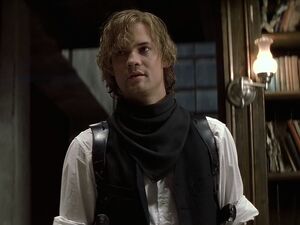 Despite only few references to Sawyer in the comic books, Sawyer was added to the film adaptation as an editorial mandate, intending to garner American "youth appeal", which dissilusioned many fans of the source material and was one of many reasons the film is disliked by Alan Moore and Kevin O'Neill. He acts as a student-of-sorts to Allan Quatermain and is a U.S. Secret Service agent who joins the League. He is played by Shane West.

Retrieved from "https://lxg.fandom.com/wiki/Tom_Sawyer?oldid=9112"
Community content is available under CC-BY-SA unless otherwise noted.